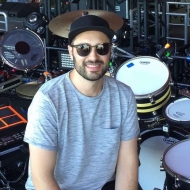 I remember how it felt to be able to play my favorite songs from the radio. From there, I was hooked! I was fortunate to study with great teachers who gave me tools that brightened many aspects of my life, and I love being able to share those tools with others.

Growing up in the Pacific Northwest, I quickly fell in love with the rock and roll of the early 90’s. I used to beg my parents to drop me off at the music store where I could spend hours playing all the cool instruments. I took lessons on piano, guitar, and percussion, while my schools allowed me to immerse myself in jazz, classical and competitive marching band.

In 2011, I moved to LA and began touring with a number of rising artists and working in the studio as a drummer, producer, and engineer. I love exploring the possibilities of blending organic drums with electronics, a skill I’ve utilized on a recent international tour with SOHN in support of his critically acclaimed album, Rennen.

As a touring sideman, I’ve enjoyed performing for audiences in North America, Europe, Australia, and Asia; from punk rock clubs, to Madison Square Garden, to festivals like Coachella and Outside Lands, and shows like Jimmy Kimmel Live, MTV Buzzworthy, and KCRW’s Morning Becomes Eclectic.