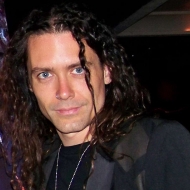 I want to be for my students the teacher I always wanted for myself: someone who understands the desire to rock the big stage and can get them there because he's been there, all the while providing a complete musical education in a fun and encouraging environment.

I was born and raised in Los Angeles, growing up just outside my eventual second home of Hollywood.  My musical journey began with the study of piano at age 5 and was accompanied by voice training and acting lessons throughout grade school.

After attending my first arena concert at age 13 I knew I wanted a career in music, but really had no idea what that meant or how to get started.  I taught myself for a couple of years but ultimately realized I needed to seek out the assistance of people who knew more.  After studying privately with various instructors I decided to change my college major to Music, and that was the turning point.
Formal music training paved the way for me to succeed, not only as a teacher but in entertainment as well.  I have toured nationally in support of three label releases - one of which received acclaim internationally - and I continue to record and perform live regularly throughout the Los Angeles area while teaching music full-time.
Drums Guitar Piano Voice