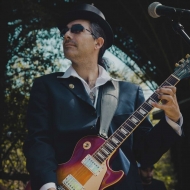 I believe the gift of music is one of the greatest, and I want to share my knowledge and experiences with as many future musicians and artists as possible.  We can all learn and enrich our lives with new music every day of our lives and I love being an integral part of that experience.

John Adair is a musician, composer, recording engineer, producer and music instructor currently residing in Los Angeles, California.  He performs, writes, records and collaborates with a number of groups and artists, as well as a solo artist.  John's work can be heard on over 5 million video games and albums, many film and TV projects, and he actively performs live and tours with many artists throughout the United States and Canada.

Some artists John has worked with include: